We were first introduced to the Electrum Pro II in July 2021. Electrum-sponsored pro player Lauren Stratman shared her paddle with us at a clinic she was facilitating.

Our first impression was that this was a paddle with unparalleled power and spin without sacrificing much control. As such, we were eager for the public paddle release, which came almost a year later in late May 2022.

Whether due to the other impressive paddles we were able to use in the interim or due to a more prolonged trial of the Pro II paddle, our final assessment of the Electrum Pro II was less than glowing. 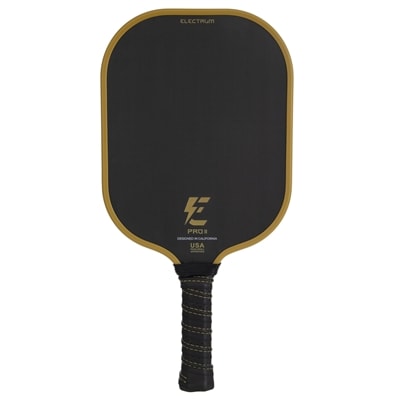 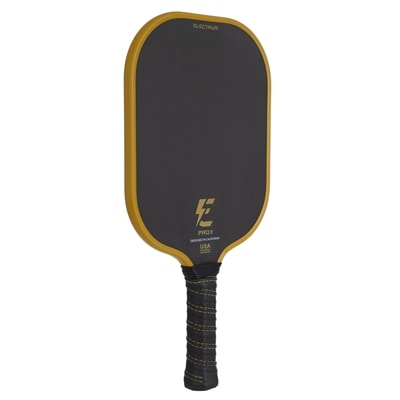 Out of the box, the paddle is gorgeous – a nice contrast of black carbon fiber facing, a genuine black leather grip, gold trim edge guard, and gold print.

As mentioned in our prior paddle reviews, we are not fans of the raised ridge grips, but admittedly, the genuine leather is a nice touch.

The Electrum Pro II weighed in at exactly 8.2 oz – as paddles improve their technology, the stock weights seem to be climbing, which is perfectly fine with us.

Eager to play with the paddle, we immediately scheduled a drilling session the following day. However, as drilling the next day wasn’t soon enough, out to the driveway we went. Family members are used to having pickleball forced on them, so we dinked for about 15 minutes.

Something felt…off, but it was difficult to identify what. The gritty carbon fiber face on the Electrum Pro II plays with just as much spin (slice or top-spin) as the Ben Johns model Joola or the Quad Carbon faced Selkirk paddles we recently tested.

As soon as we finished dinking in the driveway, we went to the front lawn to volley, simulating some fast-paced hands battles. To this day, we haven’t felt as much pop exploding through a ball over a short distance.

The ball was flying off the paddle! But here is where we were able to discover what felt…off. For dinking and most hands battles, our hands naturally move the paddle to the sweet spot unless we are moving or shifting to get to the ball.

As our practice partner began firing balls across the body, to the hips, under the arms, and straight at the groin – as our hands battles became less cooperative and more competitive – we found more balls going, “CLUNK,” off the paddle. The sweet spot of the Electrum Pro II seemed more elusive.

Despite our initial hesitation, we wanted to give the Electrum Pro II a full test run, so it was the only paddle we used over the following 6 weeks. In recreation play, league games, drilling, our competitive Sunday morning round robin; the Electrum Pro II was our go-to paddle. Here is what we learned:

Final Thoughts: What Type of Player Would Benefit from The Electrum Pro 2

Consequently, it is evident that the makers focused on a few critical components: spin, power, and aesthetics. For pro players who rarely miss the sweet spot, this is not an issue. For amateur tournament and recreational players, this smaller concentrated point caused extreme frustration.

We changed the weight on three separate occasions: originally going to 8.8 oz, dialing it back to 8.6 oz, and finally settling at 8.4 oz, with a bit of weight at 5 and 7 o’clock, and a bit more at 12.

Even with these experiments, we were only able to slightly improve the sweet spot and subsequent control, especially with the slightest of mishits.

Though we wanted to love with this paddle, after our 6-week trial run, we were happy to abandon the Pro II and go back to using the Ben Johns model Joola. 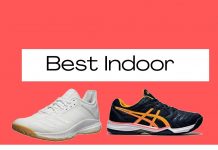 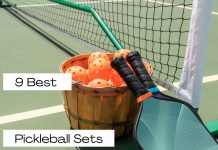 The 7 Best Pickleball Paddles Under $100