What are the best pickleball paddles without edge guards? Should you play with paddles that don’t have edge guards?

We suggest that it’s good for some people. We have scoured the online market for the best of edgeless paddles, and have compiled them into a list for you to read here.

If you’ve made up your mind about using edgeless paddles, here is a look at some of the best edgeless pickleball paddles you can buy.

This beautiful paddle from Amazin’ Aces has a clean, round edgeless design. This makes the paddle super durable. Right at the heart is a honeycombed aluminum core. Aluminum cores can be quite light but at the same time, they pack a lot of power.

This paddle also features at #7 in our list of Top 15 Best Pickleball Paddles.

The honeycomb design makes the core flexible and light, and a little softer than Nomex. What this means is, the ball will pop off slower than it does from polymer core paddles. You will have a little more time and control to manipulate the round.

The aluminum core is also quiet, so you can enjoy playing in noise restricted or quiet zones.

On either side of the aluminum core is a layer of fiberglass. The fiberglass will also improve control, and the graphite face on top of these layers will give your paddle strength and ball control.

So, overall, in this paddle, you have three layers that are designed for soft games that need a light touch and finesse. The paddle is clearly not made for aggressive play – the edgeless design is proof of that. But to make up for its edgeless design, you get three tough surfaces that are likely to be very forgiving to active, rough use and last really long.

The Amazin’ Aces Edgeless paddle weighs a nice 7 ounces even without the edge. This puts it in the middleweight range. The weight gives you some power and chances for some strong shots.

It is a very well-balanced paddle with a nice 4.25-inch grip size for the average hand. You also get a paddle cover with it.

Overall, this is a fantastic paddle for most people. If you play aggressively, however, we wouldn’t recommend it.

The construction of the Franklin Sports paddle is made to give the player a good balance between control and power.

Here is one great paddle by Franklin Sports. It is edgeless and very stylish. The graphic design on the paddle’s face looks cool.

The core of the paddle is a traditional carbon fiber honeycomb design. This core will let you serve and return balls with the kind of power that you want in your games. You’ll find a single large sweet spot across most of the paddle’s surface.

Some people will wonder if the paddle dents because of the core. You may expect a little denting, but most people who have used it have found that it’s great for control and for making shots.

If you want the advantages of this paddle but at the same time want to take those low shots without damaging the edges, we recommend getting an edge-glued to it after purchase.

At the same time, many brands offer models that have edges, for people who like to play aggressively. You can check those out in our list of Top 15 Pickleball paddles if you feel like the edgeless paddle will not stand up to your playing style.

This Onix paddle has many fantastic technologies built into it. One of the things that we really like about the paddle is its wide body shape. It is wider than the standard pickleball paddle. Plus, because it doesn’t have an edge guard, you get a comfortably large sweet spot to place your shots and you don’t have to be careful about the edge hitting the ball and deflecting it in unexpected directions.

The other feature that stands out is a new technology from Onix. This is the Ribtec technology, which makes up the core of the paddle. Instead of a honeycomb web, the paddle has a rib structure in its core that is designed to give the paddle several advantages. The rib construction has grids on it to boost power when you hit the ball. It also dampens noise, so you can play in quiet zones.

This rib structure connects two layers of foam that make the core of the paddle. The foam also gives you a springy touch on the ball, which makes the ball bounce well. Onix has made this paddle with one-piece construction. In other words, the layers are molded together in a single construction, so the paddle will last longer. This design also makes the paddle uniform across its surface. Every spot on the paddle will offer similar power and touch to your ball.

At the surface of the paddle is a graphite face. As you may know. graphite is an excellent material for maneuvering the ball and giving it some ‘pop’. The paddle also has a nice medium weight of 7.2 to 7.9 ounces. Overall, this is a very well-balanced paddle with the power, durability, and precision that you want in your pickleball game.

The paddle also has an excellent grip. The grip is 4 inches and the handle is 5 inches long. The grip has been designed ergonomically, to make the paddle feel like an extension of your hand as you play!

Some people have complained about some cosmetic chipping of the edges. This is to be expected from an edgeless paddle. You are not expected to smash it to the ground as you play. The paddle looks great and comes in three stunning combinations of blue, black and grey.

Do You Really Need an Edge Guard?

The guards at the edge of pickleball paddles are there for a reason. They protect the edges from damage when your paddle hits the ground. This is mostly a beginner problem, however. If you’ve been playing for a while now and rarely scrape your paddle against the ground, you can forego the edge guard.

The edge guard on paddles can take up quite a lot of real estate. They can eat into the sweet spot. The best paddles are designed to have very thin and seamless edge guards that aren’t raised too much from the surface of the paddle.

A common question that beginners may have when they start out with pickleball is: don’t the edge guards get in the way when you’re playing a game?

It’s true. The edge guards can sometimes deflect a ball. They can send the ball in a direction that you didn’t intend to hit in at all. So, when you use a paddle with an edge guard, you have to put in some extra work figuring out how to avoid the edges when you play. You have to find the sweet spot on your paddle. This can be a challenge, even though many paddles these days are being made oversized, with larger sweet spots.

In a nutshell, the edge guard can make pickleball less fun. So, why not get a paddle with a smooth edge? You will have a larger real estate to hit with!

What do the Official Rules Say About Edge Guards?

What are the benefits of no edge guard?

Not having an edge guard means that your paddle is going to be lighter. Paddles can weigh anywhere between 6.8 ounces (which is the weight of a softball) and 14 ounces. The heaviest paddle will probably weigh about as much as a can of beans.

An edge guard can make your paddle a little heavier. If you have a lighter paddle – minus the edge guard – it can be easier to maneuver. A lighter paddle will be very valuable especially when you’re close to the net executing a series of quick volleys. You can get a lot more control over the softer shots.

If you are a table tennis player or have played it before, then you’re likely to want a lighter paddle. Removing the edge guard from a paddle will make it feel a lot like a table tennis racquet.

There is nothing particularly unusual about a paddle without an edge. It is not a novelty paddle like a homemade paddle – which you are not supposed to play within official games. The paddles themselves are designed exactly as paddles are supposed to be.

Edgeless paddles are not ‘novelty’ paddles that you’ll find online in some places. Novelty paddles are weird, awkward gimmicks that shouldn’t have any place in the pickleball world!

What to Look for in an Edgeless Paddle?

There are some things to think about when you buy an edgeless paddle. Is the construction solid? Do you prefer to play aggressively? Do you mind cosmetic chippings on the surface? Will the paddle be too light without an edge guard? But really, an edgeless paddle has so many things going for it. Who wouldn’t want to play freestyle pickleball without having to worry about hitting the ball on a raised edge guard?

If you’re looking for a rimless paddle, there are plenty of options out there. Some are priced lower than the ones on this list. The Pickleball-X Viper Performance Carbon Fiber Paddle, sold by Franklin Sports, for example, is more than half the price of these paddles. You can always try out a cheaper rimless paddle to see if edgeless is for you.

Some of the other rimless paddles that deserve mention (they are all available on Amazon) are the Gearbox Seven Pro with a traditional honeycomb core and the super cheap Optima Polymer Composite Pickleball Paddle.

There aren’t a lot of edgeless paddles out there for you to try. We’ve chosen the best of the lot. If after playing for a while you find that you can’t keep your paddle safe from scrapes, you could always add an edge guard.

In the end, pickleball should be fun. Why let an edge get in the way of free and open play? Why not enjoy a larger surface area on which to receive the ball and send it off in style? Let us know which one of these best edgeless pickleball paddles you liked, and tell us about your experience of playing with them. 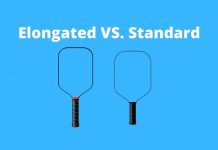